In a research report released today, analyst Rajvindra Gill of Needham reiterated a Buy rating on Micron Technology (NASDAQ:MU) with a $60 price target, as the company reported its first-quarter results Tuesday after the market close, posting $0.97 in earnings per share and $4.57 billion in revenue.

Gill noted, “MU issued strong results for F1Q15 but offered light guidance for the Feb qtr due to supply constraints related to technology deployment. Rev for the Nov qtr was slightly below consensus but saw better than expected GM% due to a 1% ASP increase in DRAM and NAND mix shift towards higher GM% mobile end market. While mgmt remains bullish long term on both DRAM and NAND, MU is expected to see headwinds related to 20nm transition on the DRAM side. TLC is expected to contribute significantly to the NAND industry’s high 30% to mid 40% bit growth rate, with shipments expected this Spring.”
Furthermore, “While we are disappointed in the guidance, DRAM pricing remains solid and we believe the technology advancements will serve as favorable catalysts longer term as MU positions itself to meet continually growing memory demands.”
According to TipRanks.com, which measures analysts’ and bloggers’ success rate based on how their calls perform, analyst Rajvindra Gill has a total average return of 17.0% and a 60.4% success rate. Gill has a 20.9% average return when recommending MU, and is ranked #112 out of 3429 analysts. 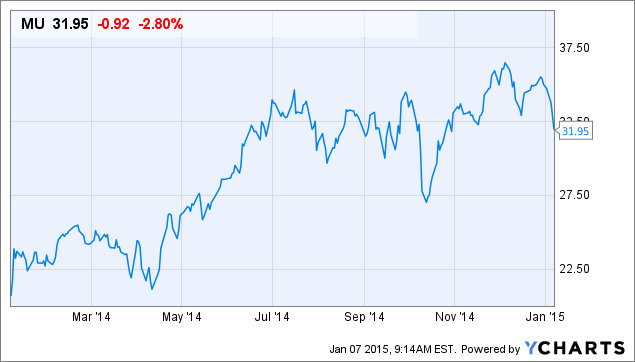