MLV analyst Carter Driscol is weighing in with a few insights on Quantum Fuel (NASDAQ:QTWW), as the company preannounced strong fourth-quarter revenues of $12-13M, above MLV’s estimate and Street consensus of ~$8.7M. The analyst reiterated a Buy rating on the stock, with a price target of $5.00, which represents a potential upside of 32% from where the stock is currently trading.

Driscoll wrote, “We believe QTWW’s positive preannouncement with expected 80- 95% q/q revenues growth – even in the face of a declining diesel/natural gas spread – is evidence that the company’s strategy to attack the fuel systems solutions market is working. Recall that QTWW decided near the end of 1Q14 that it would leverage its long history developing alternative fuel systems technologies to attack provide higher margin and higher dollar solutions than just storage tanks.”

The analyst continued, “The company had supplied former #1 customer Agility Fuel Systems with compressed natural gas (CNG) storage tanks for use in aftermarket retrofitting trucks as fleet operators are making the switch from diesel to natural gas. The two companies even discussed a deal in which QTWW would exclusively supply Agility with storage tanks, which QTWW ultimately rejected. We believe QTWW viewed a potential tie-up as one in which they would eventually be squeezed by Agility and decided instead to become a direct competitor.”

Bottom line, “QTWW is the only company we know of that offers both fuel systems and tanks. While the process of transforming itself into a turnkey fuel systems provider is not complete, today’s positive revenue guidance implies the strategy is starting to pay off.” 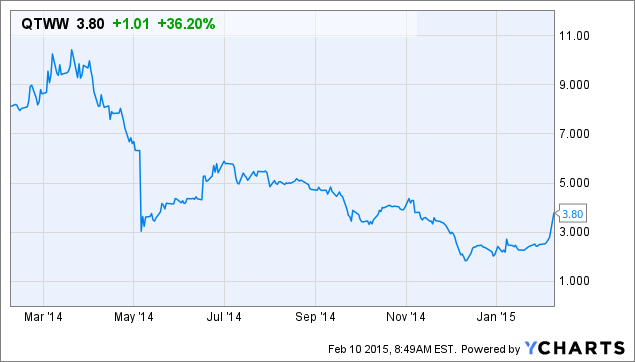