In a research report published today, MLV analyst George Zavoico maintained a Buy rating on Aeterna Zentaris (NASDAQ:AEZS) but reduced his price target to $0.80 (from $3.50), which implies an upside of 53% from current levels.

Zavoico commented: “Aeterna Zentaris suffered a serious setback in achieveing its goal of becoming a commercially operating specialty biopharmaceutical company with the recent receipt of a Complete Response Letter (CRL) from the FDA on November 2 that denied marketing approval to Macrilen™ for the diagnosis of adult growth hormone deficiency (AGHD). The key value driver becomes zoptarelin doxorubicin, now in a Phase III trial for endometrial cancer that we project could be approved in 2018 if trial results are positive. Two interim looks by an independent Data and Safety Monitoring Board (DSMB) in 2015 could serve as near-term catalysts, as will modest commission revenue on sales of EstroGel®.”

The analyst added, “Aeterna is actively seeking additional products to license in and market to further leverage its newly hired sales force. With sufficient cash to fund operations for over a year, we note that Aeterna stock is trading below its cash value.” 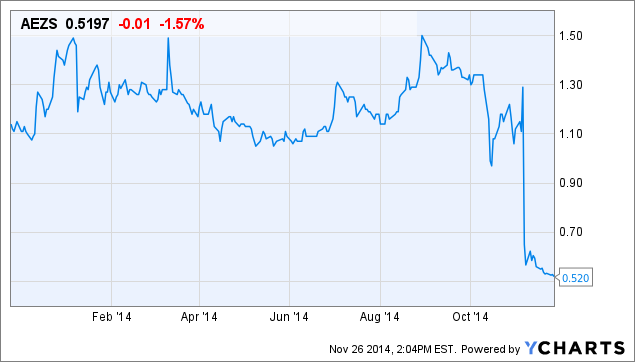