UPDATE: H.C. Wainwright Reiterates Buy On Agenus On The Back Of A New Deal With Incyte

Benjamin commented: “In our opinion, the partnership is excellent news for investors as it is represents a second major validation for the company’s investment in Agenus’ platform technology which has already attracted a collaboration with Merck. Given the resources at Incyte, we believe the new agreement should accelerate the clinical development of new checkpoint antibodies, as well as provide considerable financial flexibility, leaving Agenus’ free to pursue additional opportunities surrounding the unpartnered PD-1 and CTLA-4 programs.”

The analyst added, “With approximately $106.4 MM in cash (pro forma), the potential to secure new partnerships, and a highly versatile platform, we believe Agenus remains an undervalued player in the immuno-oncology space.” 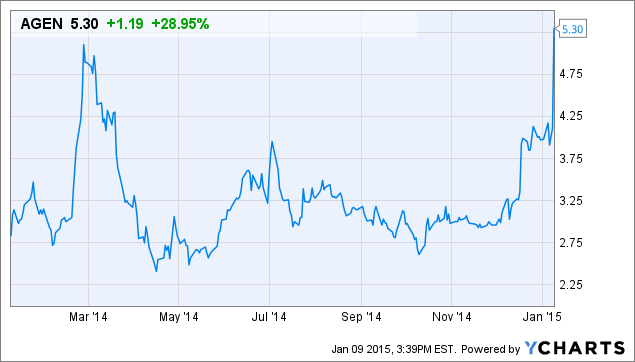