In a research report published Monday, Cantor analyst Mara Goldstein maintained a Buy rating on Array Biopharma (NASDAQ:ARRY) with a $13 price target, following the news that the company has acquired the worldwide rights to Novartis’ (NYSE:NVS) encorafenib, a BRAF inhibitor currently in a Phase-3 development for the treatment of melanoma.

Goldstein wrote, “With the acquisition of encorafenib from Novartis, Array will have greater control of the franchise, which is in late stage testing for the treatment of a variety of cancers, including BRAF melanoma, for which an NDA submission is expected in 2016. Secondly, the acquisition provides Array with greater optionality, as the deal with Novartis calls for the signing of a European partnership with Array for a global development and European commercialization partner for both encorafenib and binimetinib.”

The analyst concluded, “With the encorafenib deal inked, we see the peer valuation rising, and also see an increase in discounted revenue calculation based on our view that Array will retain a greater financial interest in binimetinib and now encorafenib. Additionally, the additional cash also incrementally adds to valuation.”

Array BioPharma Inc., a biopharmaceutical company, focuses on the discovery, development, and commercialization of small molecule drugs to treat patients with cancer in North America, Europe, and the Asia Pacific. 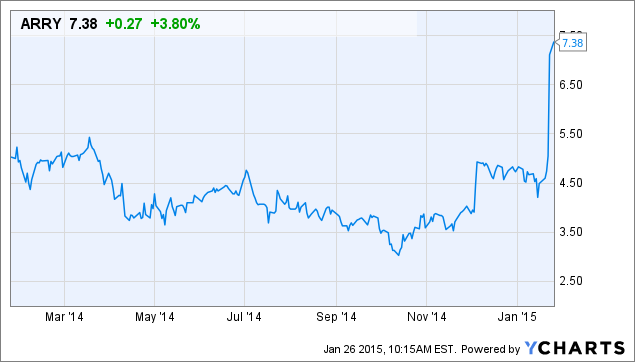