UPDATE: Brean Capital Raises Qorvo Price Target On The Back Of F3Q Results

In a research report issued today, Brean Capital analyst Mike Burton reiterated a Buy rating on Qorvo Inc (NASDAQ:QRVO) and slightly raised the price target to $85 (from $80), following the company’s release of its fiscal third-quarter results.

Burton wrote, “QRVO reported a beat-and-raise for its inaugural quarter with solid December and March quarter guidance that was above Street estimates, primarily on mobile strength. The revenue beat was largely driven by the Company’s Mobile Products segment on the back of Apple’s (AAPL) stellar 74.5M iPhone print and QRVO’s large-but-underestimated exposure to it, and higher-than-expected GMs drove up EPS.”

The analyst continued, “While we recognize that the stock may be weak after having outperformed by a lot heading into the print, and SWKS had ‘raised the bar’ by guiding for a less-than-seasonal decline, we note that our estimates (and likely the Street’s) are increasing this morning, and QRVO trades at a discount to the Semiconductor group.”

Qorvo, Inc. provides technologies and radio frequency solutions for mobile, infrastructure, and aerospace/defense applications in the United States and internationally. 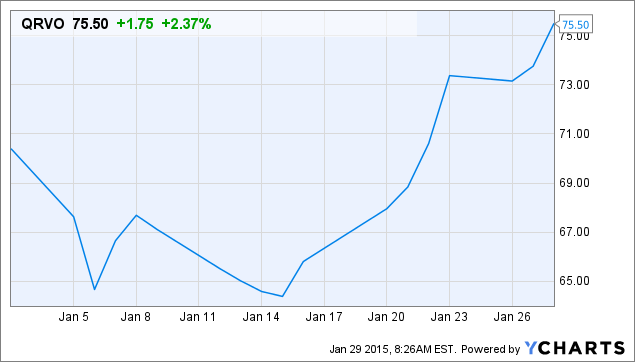