In a research note released yesterday, William Blair analyst Sharon Zackfia reaffirmed an Outperform rating on Under Armor Inc. (UA), as she expects UA to meet or modestly beat her second-quarter EPS estimate of $0.06, versus consensus of $0.07. UA will report second quarter earnings before the market open on Thursday, July 24. No price target was assigned.

Zackfia commented: “We believe sales trends remained strong in the second quarter, and we are raising our revenue projection to $578 million from $571 million, up 27% and above consensus of $572 million as well as management’s guidance for revenue growth of slightly greater than 22%. Still, we expect revenue growth will decelerate from the first quarter’s 36% cadence, given 1) higher planned footwear and international sales in the first versus second quarter, 2) lapping a relaunch of bags in the second quarter, and 3) tougher comparisons against supply-chain improvements in the second quarter. We expect apparel to be a continued driver of outperformance, with a high-20% sales gain, coupled with low-20% sales gains in footwear and accessories”.

The analyst continued, “Under Armour’s stock has risen more than 30% so far this year and is trading at 50 times our 2015 EPS estimate. Despite the premium valuation, we continue to like shares, given extraordinarily strong top-line trends in the United States and increased evidence that the company is executing well on its longer-term opportunity to build a significantly larger global premium athletic brand while delivering consistent 20% to 25% EPS growth, notwithstanding continued investments to support future growth”.

According to TipRanks.com, which measures analysts and bloggers success rate based on how their calls perform, analyst Sharon Zackfia currently has a one-year average return of 26.6% and a 64% success rate. Zackfia is ranked #417 out of 3211 analysts. 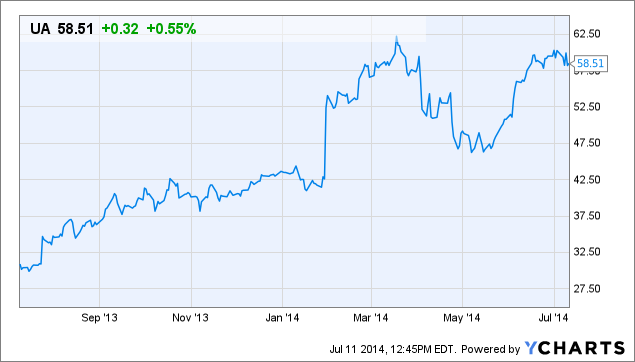