Piper Jaffray analyst Erinn Murphy came out today with a few insights on Under Armour Inc (NYSE:UA), after conducting a women’s survey where Piper Jaffray team surveyed 1,050 women online (average age 47 with 61% of the respondents falling between $35-$65k annual HH income). In the survey, Under Armour platforms highlighted as no. 1 preferred app led by My Fitness Pal.

Murphy commented: “For the first time, we added questions related to fitness apps and continued asking questions on performance apparel/footwear. We found that 32% of survey respondents currently use a fitness app. We also asked women to opine on their preferred fitness apps. When looking at UA consolidated share across its major platforms, it took the No. 1 spot at 27% mindshare–22 percentage points alone ascribed directly to My Fitness Pal–the balance stemming from MapMyFitness and Endomondo apps. Within preferred athletic brands, UA ranked No. 2 among apparel– gaining 400 bps of share sequentially and it cracked into the top 10 for preferred footwear–having been No. 14 just six months ago.”

The analyst also noted that the UA analyst day will be on Wednesday, September 16th, and she believes the company will likely stick with its longer-term revenue guidance of 20-25%, spend a decent amount of time discussing the digital opportunity as well as parsing out some of the international revenue drivers.

Murphy reiterated an Overweight rating on Under Armour shares, with a price target of $113, which implies an upside of 16% from current levels. 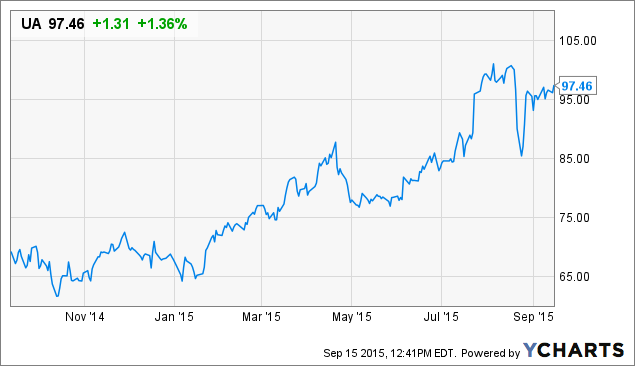