In a research note published July 18, UBS analyst John Roy reaffirmed a Neutral rating on IBM (IBM) and increased his price target to $195 (from $186), following IBM’s 2Q14 report, which was mixed but did not suffer the revenue disappointment so common the past two years.

Roy noted, “Revenue of $24.4bn down 2% was on our estimate and EPS of $4.32 slightly beat our $4.31. Weak software revenue and services bookings suggest the legacy businesses remain at risk, but overall we are encouraged. Keys to the stock working from here are (1) investor confidence in making $20 in 2015 aided by a new mainframe cycle, and (2) a shift in the perception that cloud could devastate IBM”.

The analyst believes that the gradual improvement suggests the worst may be over. Positive signs included (1) emerging market growth improving to -7%, with China’s decline halving; (2) surprisingly small declines in mainframes and x86 servers; (3) improving services margins; (4) strong repurchase activity; (5) a forecast for $16bn of FCF for the year, requiring a steep second-half ramp; (6) projection of mid-single digit software revenue gains in the second half due to a bunching of 3-year ELA renewals; and (7) reiterated guidance of $18 in non-GAAP EPS in 2014 and $20 in 2015. 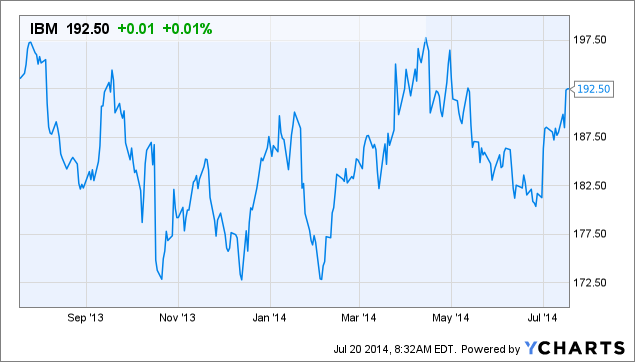