In a research note issued Friday, analyst Eric Crawford of UBS reiterated a Buy rating on Trinity Industries (NASDAQ:TRN) and raised his price target to $60 (from $55), following  investor meetings with TRN’s CFO & IR, which took place in NYC yesterday.

Crawford noted, “TRN noted seeing a broad based uptick in railcar demand (sand, cement, grain, autos). Meanwhile, there is a temporary pause in tank car demand as the industry awaits a regulatory decision (to come potentially by ~year-end). TRN is adding tank car capacity (bringing a GA facility online), as pricing trends and lease rates remain strong. Capacity decisions are determined in concert with customers’ indication of longer-term needs. Accordingly, we view TRN’s current capacity expansion as an indication of significant railcar demand yet to come. We believe TRN has visibility beyond its $5.5b railcar backlog, & believe TRN is positioning itself to be the supplier of choice for the highest margin orders.” 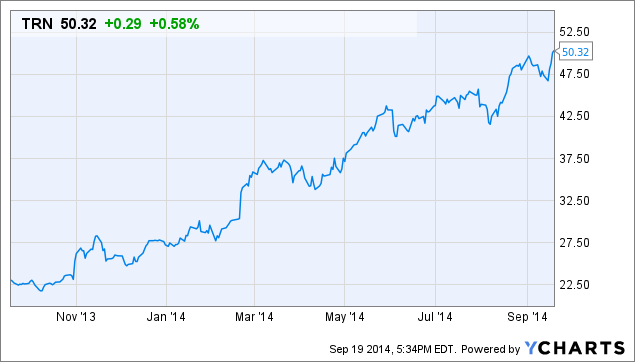