In a research report released Friday, UBS analyst Robin M. Farley reiterated a Neutral rating on International Game Technology (NYSE:IGT) with a price target of $18.25/share, which represents a potential upside of 9% from where the stock is currently trading.

Farley wrote, “A replacement cycle pick-up in North America seems unlikely even after declines/ easy comps in ’14. We think flat YOY trends could be a best case scenario in most markets for 2015. With regional consolidation, there is more flexibility for the regional operators to move games around rather than having to replace games. It sounds like floors are still older today than they were pre-recession but that may be the right level going forward. And all operators noted the shrinking floor, that as revenues declined, operators could better yield manage the floor by reducing units rather than replacing them – even Wynn in Vegas has done this recently, not just the regional players.”

The analyst added, “GTECH is expected to acquire IGT at $18.25/share, consisting of $13.69 in cash plus shares of newly formed company equal to $4.56 divided by a calculation of the dollar value of GTECH shares prior to the transaction. IGT and GTECH recently amended the agreement to remove the flexibility for shareholders to vote to receive either all-stock, all-cash, or a mixture of stock and cash; all will now receive a mixture of stock and cash.” 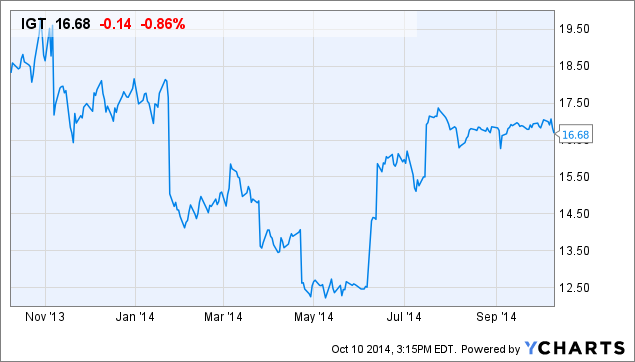