Chin wrote, “We believe GT’s multi-year sapphire materials agreement with Apple which was announced just 11 months ago has gone much slower than expected and contributed to this chapter 11 filing. Our proprietary monthly GT checks last week (see note “GT: Monthly sapphire sales in grey area”, dated 9/29/14) showed GT’s shipments to Apple were still quite low at only around 2M two-inch equivalents a month which was well below our estimate for full nameplate capacity of this sapphire factory at 32M TIEs. We had previously estimated a downside case of GT having an opportunity to raise capital in 4Q14 if it did not receive its 4th and final cash prepayment from Apple of $139M this month. While Apple and GT have never confirmed what GT’s sapphire was supposed to be used for, we believe it was for the initial iPhone6 and watch covers and this inability to fully ramp may have contributed to the sudden bankruptcy filing.”

The analyst continued, “GT reported that it still expects to conduct business as usual but it is unclear to us if this still involves selling sapphire to Apple. Our new estimates now assume zero sales to Apple and only include sales of solar equipment, polysilicon equipment, LED equipment and Hyperion sales. We will continue to rely on our proprietary monthly sapphire checks to help determine if GT’s relationship with Apple is still ongoing and if GT’s factory is capable of fully ramping. Until GT’s sapphire factory can show it can ramp to full capacity we lack confidence that there will be any additional potential acquirers.”

According to TipRanks.com, which measures analysts’ and bloggers’ success rate based on how their calls perform, analyst Stephen Chin has a total average return of 18.4% and a 78.6% success rate. Chin has a 20.3% average return when recommending GTAT, and is ranked #145 out of 3334 analysts. 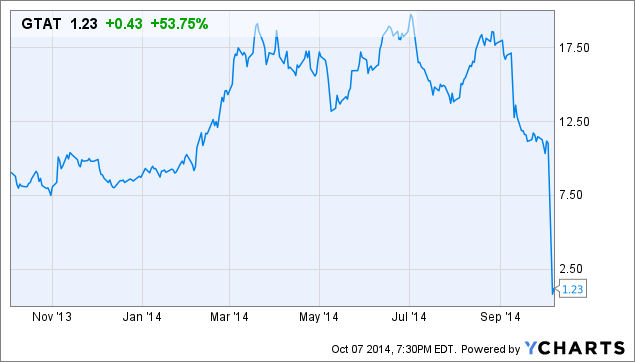 GT Advanced: Too Many “What-Ifs” Keep Us On The Sideline, Says UBS