In a research report issued today, UBS analyst Jason DeRise maintained a Neutral rating on Costco Wholesale Corp. (NASDAQ:COST) and increased his price target to $125 (from $124) ahead of the company’s release of its Q4 earnings.

DeRise said, “Costco previously reported Q4 net sales of $34.8bn on September 4, driven by 7% comparable store sales growth ex fuel and FX. The unknowns are, in order of importance, the membership fee income (MFI) and ex-MFI EBIT margin. We estimate Q4 membership fee income of $765m, up 6.9% y/y (7.5% ex fx), driven by 4.6% store growth and 2.4% member/store growth (similar to last quarter). We project EBIT margin ex-MFI of 0.9%, up ~15bps y/y. Last Q4 marked the start of the gross margin pressure from fresh food inflation, particularly on poultry prices (compared to Costco’s flat $4 charge for its rotisserie chicken). We believe COST found a supplier focused solution to offset this gross margin pressure since then (definitely did not raise the price of the chicken). As it laps this headwind, we expect y/y retail margin expansion.”

The analyst added, “Though Costco’s performance year-to-date has been in line with the Consumer Staples sector, it is now trades ~1 standard deviation above its historic multiples on EV/membership fee and price/membership fee bases (see report for details). While we continue to believe its virtuous circle structure creates a difficult to replicate sustainable competitive advantage, we believe the company’s valuation is full at the current time.” 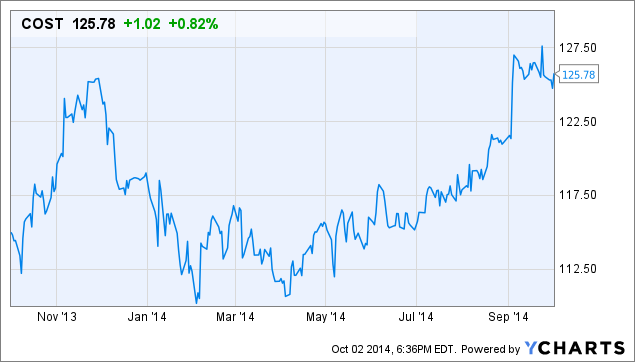