UBS analyst William Featherston came out with a negative report on Chesapeake Energy Corporation (NYSE:CHK) after analyzing both the reduction of US natural gas prices, and the decline of production from the company. Featherston downgraded Chesapeake from a Neutral to a Sell rating, and slashed the price target from $16 to $11. Shares of CHK are currently trading at $11.18, down $0.37, or -3.20%.

Featherston observed, “In addition to our lower gas price forecast (gas represents 73% of 2015E production), we think CHK carries far too much financial leverage, prompting a material reduction in activity that is contributing to a declining production profile in 2015-16E. While CHK is just one of two companies in our universe with both declining production throughout 2015 and into 2016 and a deteriorating balance sheet (FCF negative), it trades at a material premium to peers on EV/DACF.”

Moreover, “CHK’s production has already begun to decline in 2Q, and should see accelerated declines as well completions fall from >250 in 1Q to ~180 in 2Q and just ~50 in 4Q. We forecast 2016E production declines 5% YoY to 617 MBoed, below consensus of 625 MBoed. And given the FCF deficit, we forecast CHK has below average production and cash flow per debt-adjusted share growth compared to its peers in 2015-19E.” 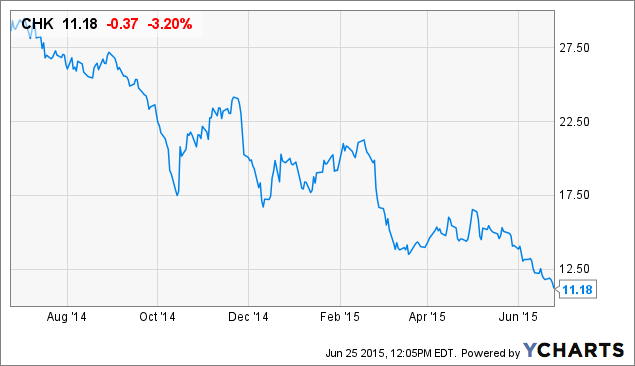