In a note released today, Axiom analyst Gordon Johnson reiterated a Sell rating on Trina Solar Limited (NYSE:TSL) with a price target of $8.00, following comments made by TSL’s CEO to Bloomberg.

Johnson noted, “on the back of this Bloomberg article, this morning, a number of our clients have sent us emails proclaiming that TSL’s is out with positive commentary on solar. However, after looking at TSL’s guidance provided during its 8/26/14 conf. call, we believe the optimism on the back of Bloomberg’s comments is, once again, completely mis-guided. What do we mean? Well, taking TSL’s C3Q14 & C4Q14 module shipment guidance of 950MW & 975.9MW, respectively, and annualizing them, you get 3.8GW & 3.909GW. Why is this important? Well, TSL has stated that their targeted module capacity by 12/31/14 is 3.8GW (from 3.6GW currently). Thus, this means, on 8/26/14 when TSL previously reported C2Q14 earnings, the company implicitly told everyone that it would be at/above 100% capacity utilization for the rest of 2014. However, in the Bloomberg story, the CEO’s reiteration of this point today is positioned to make is seem as if demand is currently outstripping supply. At risk of stating the obvious, as detailed below, we do not believe this is the case.”

The analyst concluded, “TSL’s stock, and other solar stocks, are rising due to comments attributed to TSL’s CEO by Bloomberg. However, after a review of what was said vs. what TSL guided, we note that: (1.) TSL simply reiterated their shipment guidance for the year, which they previously provided 8/26/14, which directly implied, at the time it was provided (i.e., 8/26/14), the company would be at, or above, 100% module utilization in both C3Q14 and C4Q14, and (2.) TSL has taken down its full-year cell capacity target to 2.8GW vs. 3.0GW prior (this is not a positive, and rather suggests the company could be facing cash-flow issues). Yet, the stock is up ~5% in a down market day. We don’t know what else to say than… things that make you go hmmmmm?” 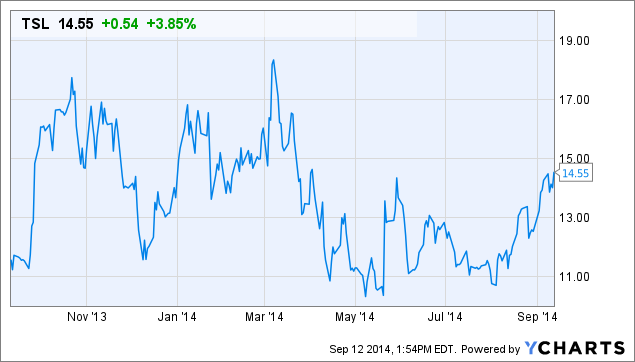