In a research report issued yesterday, Topeka Capital analyst Victor Anthony maintained a Hold rating on Ebay Inc (NASDAQ:EBAY) with a price target of $59.00, as the company announced that it plans to separate eBay and PayPal into independent publicly traded companies in 2015 in a tax-free transaction.

Anthony observed, “We have argued for this since our initiation of coverage in 2012, believing that the synergistic benefits of combining the e-commerce and payments businesses have largely been achieved, and given the rising competitive landscape, both businesses should be free to pursue their own targeted growth objectives. While we are not discounting the presence of activist shareholders, the timing, we believe, is largely influenced by the expansion of Apple (AAPL-$100.63:NR) and Amazon (AMZN- $319.32:Buy) into payments (note: to the exclusion of PayPal), and the potential for Facebook (FB-$78.94:Buy) to enter as well, given the hiring of David Marcus. Maintain Hold as we continue to see a rising competitive landscape for PayPal.” 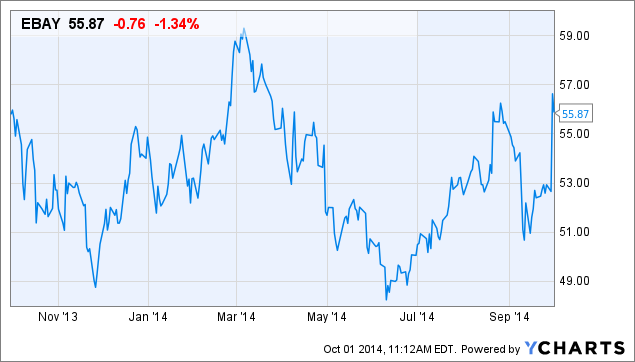