In a research note issued August 11, Roth Capital analyst Scott Henry maintained coverage with a Buy rating on Tonix Pharmaceuticals (TNXP) and a $17 price target, following the company’s second-quarter results, which included an EPS loss that was modestly larger than Henry targeted. However, this appears largely noise related to the timing of spending and pipeline advancement. Importantly, the trial readout for the key phase 2/3 fibromyalgia BESTFIT trial appears an early 4Q14 event (enrollment complete).

Henry noted, “The company reported zero revenues as expected. However, higher G&A negatively impacted EPS by ~$0.02 and higher R&D also resulted in a ~$0.05 deduction to EPS. Net, the EPS loss of $0.61 was higher than our targeted EPS loss of $0.53. Despite the greater loss, we viewed the quarter as fundamentally within expectations. The company’s balance sheet remains strong with cash of ~ $44 million.”

The analyst added, “We continue to view TNX-102 SL for fibromyalgia as an undervalued asset. Given our positive outlook for the phase 2/3 trial data coming in 4Q14, we reiterate our Buy rating with a risk adjusted price target of $17/share for risk tolerant investors. The emerging earlier pipeline compounds could act as additional catalysts.” 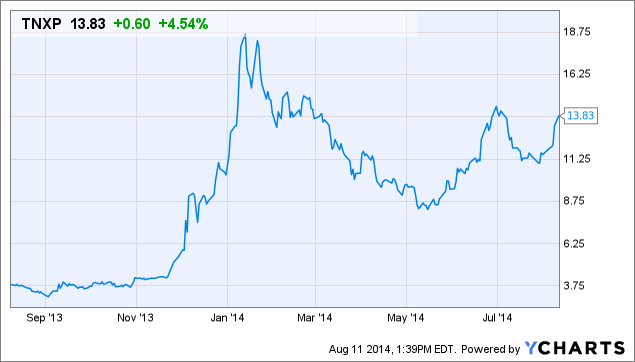