Fein noted, “Although the interim announcement appears to have either spooked or disappointed the market based on yesterday’s THLD trading pattern, we regard the IDMC green light positively, as the study now continues towards its event-driven destination. Previously, we had guided investors to the following outcome probabilities upon the IDMC interim review: 10% probability of early stop due to futility; 20% probability of early stop due to early efficacy; 70% probability of clearance to continue to completion in 2015 (current outcome). As a reminder, based on the study design, and assuming a 13-month survival benefit in the Dox comparator arm (based on the historical 12.8 months recorded for Dox by the EORTC 62012 study), TH-302 would have needed to record an 18.8-month survival benefit at interim (+5.8 months vs Dox; rounding). Under the same historical Dox assumption, with the study now running to completion (434 events), TH-302 will need to show at least a 15.8-month survival benefit upon completion (+2.8 months vs. Dox). In perspective, the EORTC STS study found that ifosfamide addition to Dox confers PFS but not OS benefit, while the addition of palifosfamide to Dox in Ziopharm’s STS Phase 3 study failed on PFS and was halted before an OS readout. In that context, known data on TH-302 compare favorably to the PFS and OS trends from the EORTC study. While, to date, the primary lesson learned from past STS studies is that PFS and OS do not emerge as well correlated following the testing of experimental drugs in the front line, we believe that the key to reversing this trend is continued maintenance treatment.”

According to TipRanks.com, which measures analysts’ and bloggers’ success rate based on how their calls perform, analyst Andrew Fein has a total average return of 7.8% and a 53.3% success rate. Fein has a 0.2% average return when recommending THLD, and is ranked #901 out of 3295 analysts. 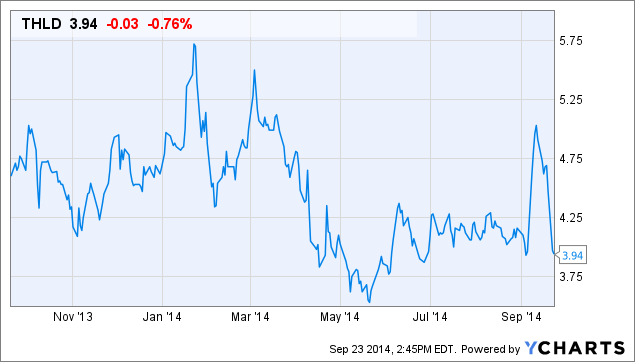