In a research report released today, Edison analyst Philippa Gardner offered a commentary on Threshold Pharmaceuticals, Inc. (NASDAQ:THLD), as the company’s earlier-stage hypoxia asset, Tarloxitinib (TH-4000), has now started two Phase II studies. The analyst included an indicative valuation for this asset in his NPV-based valuation, which has increased to $14.30/share.

Gardner noted, “We believe both trials could report initial data during 2016, providing key initial insights. Tarloxotinib is a hypoxia activated EGFR-TKI, which could lead to less systemic toxicity, potentially allowing tarloxotinib to overcome dose-limiting rash and diarrhoea associated with current EGFR-TKIs. This mechanism could enable more effective tarloxotinib doses to be administered. Tarloxotinib could also have utility in some cancer patients with poor prognosis where current TKI therapy has limited benefit.”

Furhtermore, “Our Threshold valuation is increased to $1,023m or $14.3/share, including an indicative valuation for tarloxotinib in the two indications now under active Phase II development. Cash at end-June of $67m should be sufficient to fund operations into H216 in the absence of any future milestone income. Threshold is entitled to further evofosfamide development-related milestones, which could become due before H216, and could therefore extend this cash runway.”

All the 6 analysts polled by TipRanks rate Threshold stock a Buy. With a return potential of 168%, the stock’s consensus target price stands at $13.50. 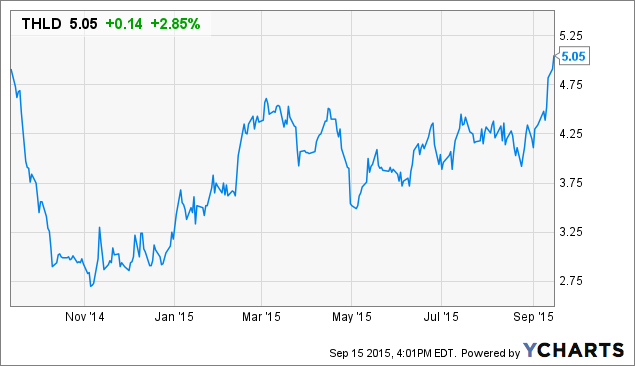