The Case for Buying Groupon Inc Into Earnings: Brean Capital

Brean Capital analyst Tom Forte weighed in today with an optimistic view on Groupon Inc (NASDAQ:GRPN), as the daily deals company is scheduled to report its second-quarter earnings on Friday, August 7th before market open. Groupon shares are up 0.42% to $4.83 as of 12:01 PM EDT today.

Forte wrote, “Since trading at a recent high of $8.30 in late February, shares of Groupon have, for the most part, gone straight down, declining 42.0%, which we attribute to a buyer’s strike. In our earnings preview, we highlight three reasons to buy shares into the quarter: 1) the potential for sustained North-American daily deal growth despite a tough comparison in 2H15, 2) restaurant delivery efforts could diversify Groupon’s product portfolio, and 3) valuation.”

“Consistent with the history of the stock, we expect shares to be volatile next Friday after the company reports earnings. Its shares have moved, on average, up or down 16.4% on the first day of trading after Groupon announces results, with moves of more than ten percent 71% of the time and more than twenty percent 50%. We note that its current short interest is roughly 17% of its float.”, the analyst added.

Forte reiterated a Buy rating on GRPN with a price target of $11, which implies an upside of 129% from current levels.

Out of the 20 analysts polled by TipRanks, 11 rate Groupon stock a Hold, while 9 rate the stock a Buy. With a return potential of 80.9%, the stock’s consensus target price stands at $8.69. 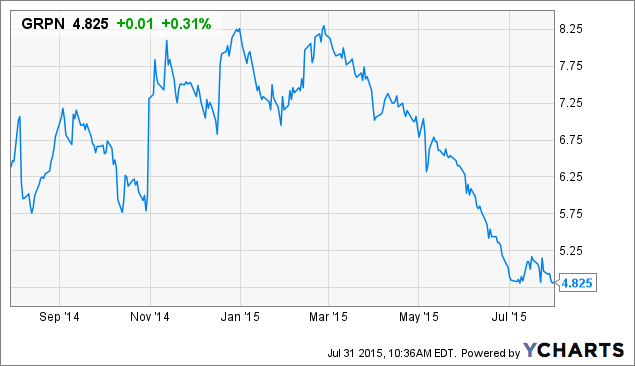