Tekmira: We Have Accelerated Our Ebola Assumptions Which Drives Additional Upside, Says Maxim

In a research report released today to investors, Maxim Group analyst Jason Kolbert reiterated a Buy rating on Tekmira Pharma (NASDAQ:TKMR) and raised his price target to $31 (from $23), as the company announced the achievement of a development milestone, supporting a $1.5 million payment from Monsanto, following completion of specified program objectives.

Kolbert noted, “This work is part of the research program under the Option Agreement Tekmira signed with the agriculture company, which was announced on January 13, 2014. The Option Agreement relates to Tekmira’s proprietary delivery technology and intellectual property for use in agricultural applications. The potential value of the transaction could reach up to $86.2 million, following the successful completion of all program milestones.”

The analyst continued, “This news follows the recent news of a reported case of Ebola in Texas. Tekmira continues to make progress in the development of TKM-EBOLA. On September 22, 2014 the company announced that TKM-EBOLA was cleared for emergency use on the ground in West Africa. The company announced it will join an international consortium that will establish clinical development centers in Ebola hot zones. We have accelerated our Ebola assumptions and as a result it drives additional upside.” 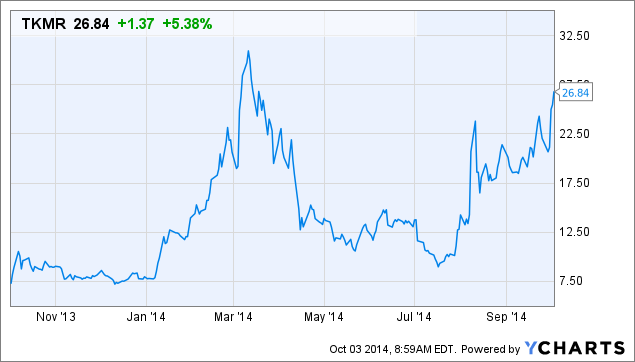