In a research report issued today, Deutsche Bank analyst Amit Mehrotra reiterated a Buy rating on Teekay Corporation (NYSE:TK), and increased his price target to $100 (from $90), which represents a 53.7% upside from where the stock is currently trading.

Mehrotra noted, “TK offers an extremely compelling investment opportunity in our view given its long term and locked in fee-based revenue stream, and well capitalized daughter companies allowing for the vast majority of its growing cash flow to be returned to shareholders. As a result, we see significant upside in TK shares as the company’s highly capable mgmt. team executes on its vision of shifting the company from a cyclical to secular cash flow story. Ultimately we see potential for TK’s dividend to increase by more than 3x by 2018 (vs. 2014), which should easily translate to a triple-digit stock on an npv basis.”

The analyst added, “TK’s baseline dividend growth guidance of 32% annual CAGR (2014-2018), while highly impressive (and already 82% locked in), still appears conservative to us. For example, this baseline assumes a 1.175x coverage ratio (i.e. buffer) which management has noted it intends to reduce “over time”. We estimate every 0.1x reduction in this buffer translates to 41c/share of additional dividend in 2018. This means a coverage ratio of 1.0x would equal an additional ~70c/share annually, which we estimate would translate to an incremental $25/share of equity value assuming a ~3% yield. While a coverage ratio of 1x may appear not conservative enough, we believe this is where TK is slowly heading given the daughter companies’ growth prospects and resilient revenue stream (average remaining contract length for LNG MLP is 13yrs, while Offshore MLP is over 5yrs and growing pro forma for expected dropdowns).” 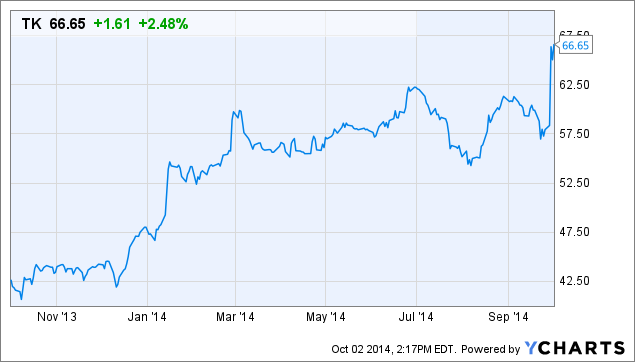