In a research report released today, H.C. Wainwright’s healthcare analyst Andrew Fein maintained a Buy rating on Synthetic Biologics Inc (NYSE MKT:SYN) with a $4.00 price target, following the company’s analyst and investor meeting in NYC, where it has focused attention on its core expertise in the microbiome arena.

Fein wrote, “As we expect the microbiome space to garner increased investor focus in the coming year, especially following the recent announcement of an IPO filing by Cambridge-based Seres Therapeutics (estimated at $100M), Synthetic Biologics remains, in our opinion, the most mature play in this emerging space with: (a) two advancing clinical programs for SYN-004, an oral beta-lactamase in C. difficile infections (with initial safety data now in hand) and SYN-010, a modified release formulation of lovastatin for IBS-C; (b) recent identification of a novel beta lactamase, P2A adding to SYN’s repertoire of beta lactamase products and providing the opportunity for expansion to carbapenem antibiotics; and (c) recent additions to the growing expertise of the management team, including Klaus Gottlieb, MD, with extensive experience in IBD and GI clinical trials joining as VP of Clinical and Regulatory Affairs to lead clinical study teams. We believe SYN continues to remain undervalued in the face of a catalyst-heavy year.”

According to TipRanks.com, which measures analysts’ and bloggers’ success rate based on how their calls perform, analyst Andrew Fein has a total average return of 26.1% and a 65.6% success rate. Fein has a 56.9% average return when recommending SYN, and is ranked #122 out of 3610 analysts. 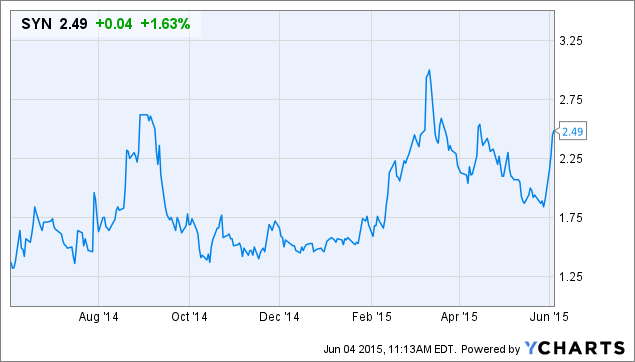