In a research report released this morning, Canaccord analyst Corey Davis reiterated a Buy rating on shares of Synergy Pharmaceuticals Inc (NASDAQ:SGYP) with a price target of $19, which implies an upside of 208% from current levels.

Davis wrote, “In plecanatide’s 423-patient Ph2, 3.0 and 9.0mg met the FDA approval endpoint of “percentage of overall responders”, who are defined as those fulfilling both ≥30% reduction in worst abdominal pain and increase of ≥1 CSBMs from baseline in the same week for at least 6/12 weeks. Even at the highest dose, diarrhea rate was only 11.8%, almost half of the 20% observed in Linzess’ Ph3. It’s unclear to us exactly how much of a problem diarrhea is with Linzess in clinical practice. Since every drug that we are aware of that has passed Ph2 in IBS-C has passed Ph3 and gone to approval, we are optimistic about plecanatide’s Ph3 readouts in late 2015/early 2016. However, IBS-C is a very different disease than CIC.”

All the 5 analysts polled by TipRanks rate Synergy Pharmaceuticals stock a Buy. With a return potential of 103%, the stock’s consensus target price stands at $12.50. 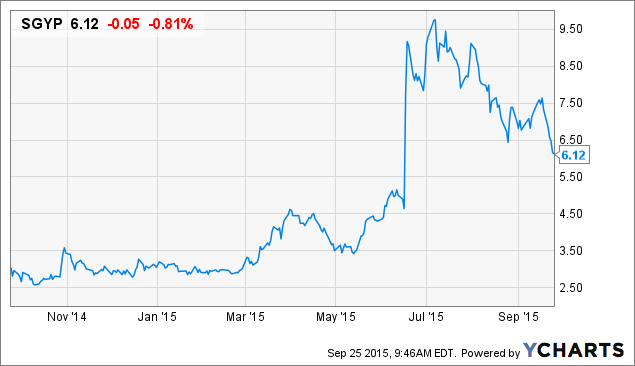