In a research note published Friday, Argus analyst Joseph Bonner maintained a Buy rating on Symantec Corp. (NASDAQ:SYMC) with a $35 price target, following the company’s announcement that it is going to split its information security and information management businesses into separate publicly traded companies in an effort to reduce operational complexity and generate greater value from its existing assets.

Bonner wrote, “In our view, Symantec’s difficulties have been driven more by management upheavals than by problems with its assets, which are often best or near best-in-class. While the high level of integration between the two businesses will make the separation difficult, we believe that both of the new independent companies could become M&A targets following the transaction.  We like Symantec’s “pivot” from its traditional threat-protection offerings to threat detection and response, which we think is more in line with current customer needs. In the wake of almost weekly security breach announcements and the notorious Heartbleed virus, the threat environment has never been more toxic. Symantec’s challenge is to get in front of the market with products that will keep customer data safe. We think that Symantec’s new management has correctly identified customers’ needs. It must now execute its product roadmap to address these needs while at the same time working through the business separation.  In our view, SYMC remains undervalued relative to peers.” 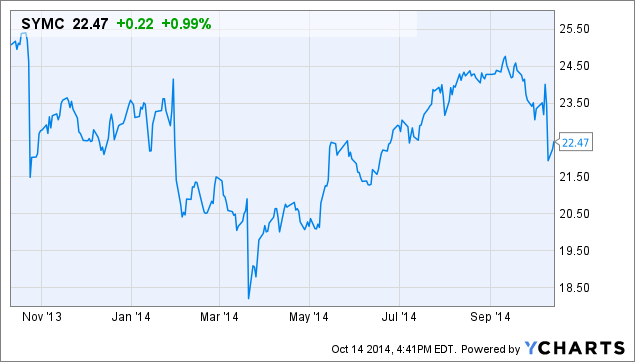