In a research report issued Friday, Summit Research analyst Henry Guo reiterated a Buy rating on shares of Jumei International Holding Ltd (ADR) (NYSE:JMEI) and reduced the price target to $25 (from $30), after the company reported soft third-quarter guidance on Wednesday. The analyst has lowered his EPS estimates for 2016 due to lower margin on cross border transactions.

Guo wrote, “JMEI shares sell-off yesterday was mainly due to the company’s disappointing guidance, which calls for 82%-85% revenue growth (in US dollar) for 3Q15, significantly decelerating from 2Q15’s 100% Y/Y. While devaluating Chinese Yuan should limit 3Q15 revenue growth, we believe this time management is over-conservative on its guidance. Based on our conversation with management post earnings, we believe management is still conformably expecting revenue (in US dollar) to accelerate in 3Q15 if current exchange rate between US dollar and Chinese Yuan remains stable, which implies a mid-ninety percentage Y/Y growth vs. current guidance of 82%-85%.”

Furthermore, “We sense that the company is likely to change its financials reporting from US dollar to Chinese Yuan staring from 3Q15 earnings release, in order to minimize Y/Y comparison inconsistency. We believe the market overreacts to the company’s guidance, and JMEI shares’ weakness creates buying opportunities.”

According to TipRanks.com, which measures analysts’ and bloggers’ success rate based on how their calls perform, analyst Henry Guo has a total average return of -5.9% and a 17.6% success rate. Guo is ranked #3328 out of 3738 analysts. 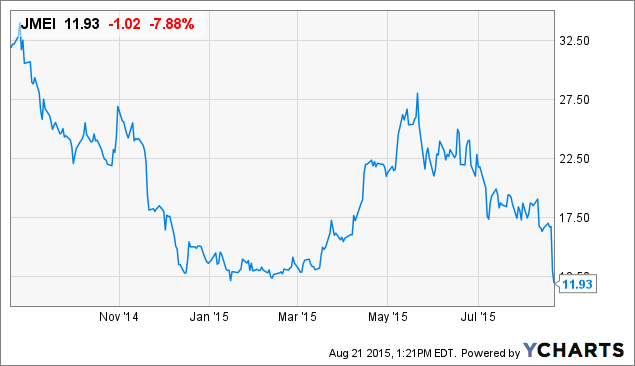