Stryker Is One Of The More Compelling In The Medical Technology, Says William Blair

In a research note issued July 18, William Blair analyst Matthew O’Brien maintained an Outperform rating on Stryker Corporation (SYK), following the company’s second-quarter results that were essentially in line with estimates, but better-than-expected on the top line. No price target was provided.

O’Brien wrote, “Stryker reported second-quarter revenue and earnings per share in line with consensus estimates; however, when adjusting for the one less selling dayin the quarter, performance came in better than expected (up more than 6%). The organic hip and knee performance in the quarter actually seems to be quite solid and we are seeing steady improvements with the MAKO integration (though results here arelikely still below the performance the asset would have delivered as a stand-alone entity). While we continue to view the price paid for MAKO as too high, streamlining the organization’s selling efforts within Stryker, to go along witha company-specific hip product that should be introduced next year and a total knee application as well, should position the asset to deliver meaningfully improved results in 2016, which should be followed by international expansion ofthe technologyand further growth. Consequently, MAKO should provide a multiyear tailwind in hips and knees for Stryker, though we do not anticipate it will be strong enough to push the company into the No. 2 position in largejoints, which is what management is targeting. Given this view, we continue to believe that Stryker will indeed purchase Smith & Nephew to bolster both itslarge joint business and its sports medicine franchise”.

The analyst concluded, “We simply do not see too many large-cap names with the ability to predictably deliver midsingle-digit revenue and lowdouble-digit earnings growth overa multiyear period, which makes the name one of the more compelling ones in all of medical technology, in our view. Consequently, we believe investors should continue using the name at these levels (15 times the consensus 2015 EPS target) and rate the stock Outperform.

According to TipRanks.com, which measures analysts and bloggers success rate based on how their calls perform, analyst Matthew O’Brien currently has a one-year average return of -9.1% and a 0% success rate. O’Brien has a -2.5% average return when recommending SYN, and is ranked #2746 out of 3207 analysts. 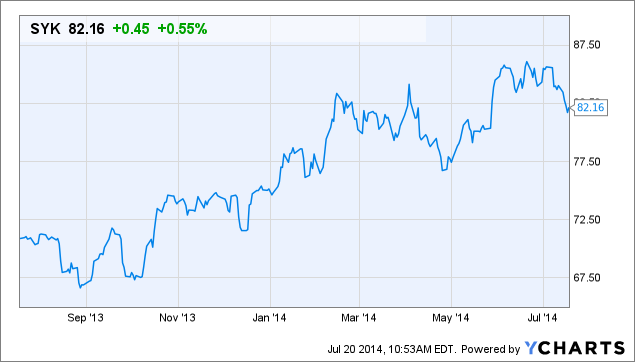