Stifel Nicolaus analyst Scott Devitt was out pounding the table on Paypal Holdings Inc (NASDAQ:PYPL) Monday, upgrading shares from a Hold to a Buy rating, with a price target of $40, which implies an upside of 17% from current levels.

Devitt noted, “We believe One Touch has the potential to drive low/mid-single digit upside to our 21.8% y/y FX-adj. 2016 TPV growth estimate based on the incremental conversion and average order value increases it brings to merchants. We view One Touch as a critical product innovation that directly addresses (1) shopping cart abandonment, (2) merchant integration issues, (3) user adoption, and (4) security concerns.”

Furthermore, “Though the product is early in its global rollout and only accounts for 5% of U.S. transactions we believe it could drive upside to numbers even if the company’s 50% U.S. penetration target exiting 2015 proves aggressive. We do not model the impact from One Touch yet as we await further updates from the company, but are impressed by the quality of the One Touch interface.”

The analyst concluded, “PayPal’s current valuation is closer to merchant acquirers at 11.8x and a significant discount to card networks and large cap internet franchises that trade at 15.1x and 17.8x, respectively. We believe current levels present a buying opportunity given PayPal’s competitive position, new product/vertical opportunities, international initiatives, and strategic M&A. These strengths and opportunities combined with a 3yr revenue and adj. EBITDA CAGR of 15% and 18% respectively make us more constructive at current prices.”

According to TipRanks.com, which measures analysts’ and bloggers’ success rate based on how their calls perform, analyst Scott Devitt has a total average return of 17.3% and a 63.2% success rate. Devitt is ranked #97 out of 3765 analysts.

Out of the 28 analysts polled by TipRanks, 19 rate Paypal stock a Buy, 6 rate the stock a Hold and 3 recommend Sell. With a return potential of 22.8%, the stock’s consensus target price stands at $42.13. 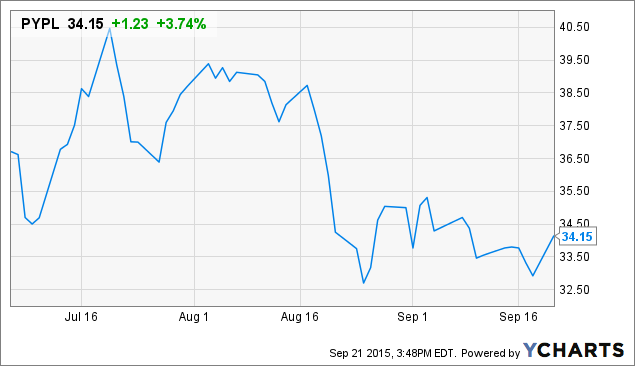