STAAR Surgical: Warning Letter Is A Setback, But A Manageable One, Says Canaccord

In a research note published Tuesday, Canaccord analyst Jason Mills maintained a Buy rating on STAAR Surgical Company (STAA) with a price target of $21.00, after STAA received a warning letter from FDA on May 21 that was disclosed on the agency’s website yesterday morning.

Mills commented: “We believe the components of the warning letter are manageable (many have already been resolved); moreover, we think there is a reasonable possibility the WL will not materially impact the Toric ICL approval timing (we have always modeled late 2014), nor the overall business in general. We expect up to $300-400K of incremental OpEx in Q2 attributed to the company’s decision to address all of the components of the WL as quickly and comprehensively as possible. According to management, all of the issues raised in the WL (with the exception of some accelerated and real-time stability testing) will be resolved by the company and filed with the agency by the end of July. As for the testing, the company said it should not impact the approval process at all, based on discussions with FDA. While we never like to see a warning letter, especially ahead of an important FDA approval such as Toric ICL, we think these issues are manageable, and management seems to have proactively addressed the issues raised by FDA in a much more professional, expeditious manner than was done by previous management the last time STAA received a warning letter from FDA in 2002. We maintain our BUY rating. Our estimates and target price are unchanged”.

According to TipRanks, which measures analysts and bloggers success rate based on how their calls perform, analyst Jason Mills currently has a one-year average return of -2.1% and a 47% success rate. Mills has a -18.1% average profit recommending STAA, and is ranked #2850 out of 3154 analysts. 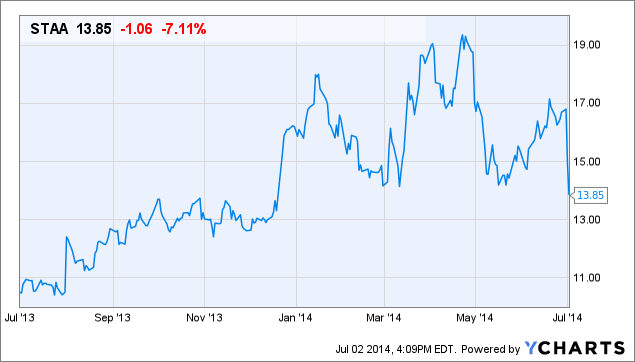 Billionaire Steven Cohen Pulls the Trigger on These 2 Penny Stocks

Oppenheimer Sees These 3 Stocks Skyrocketing Over 100% From Current Levels

These 3 Penny Stocks Could Rally Over 100%, Says Roth Capital