In a research report issued late Friday, William Blair analyst Tim Lugo assigned a Market Perform rating on Shire PLC (NASDAQ:SHPG) with a price target of $250, following the company’s third-quarter earnings. Revenue of $1.597 billion, up 32% yearover- year, was above the consensus of $1.453 billion and ahead of William Blair estimate of $1.469 billion.

The analyst concluded, “We continue to rate shares of Shire a Market Perform as this saga winds down; however, we view Shire as one of the highest-quality companies in the sector. We will wait until the completion of the third-quarter call to hear additional details on any lasting impact possible through employee turnover caused by the cancellation of the AbbVie deal and organic growth drivers for the future.”

According to TipRanks.com, which measures analysts’ and bloggers’ success rate based on how their calls perform, analyst Tim Lugo has a total average return of -5.1% and a 47.1% success rate. Lugo is ranked #2906 out of 3343 analysts. 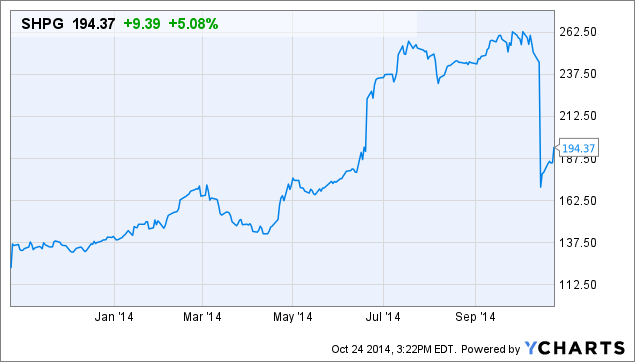