In a research note published August 8, H.C. Wainwright analyst Reni Benjamin maintained a Buy rating on Keryx Biopharmaceuticals Inc. (KERX) with a $19 price target, following the release of the company’s second-quarter results. The company reported a net loss of $(22.4) MM or $(0.24) per share, less than Benjamin’s net loss estimate of $(24.4) MM or $(0.27) per share. Operational expenses totaled $22.5 MM, less than Benjamin’s estimate of $24.7 MM, primarily due to a significant drop in R&D expenses from the previous quarter. If Zerenex is approved in September, Benjamin expect sales to begin in 1Q15.

Benjamin wrote that during “Yesterday’s 2Q earnings call, the company indicated it expects to receive a draft of the Zerenex label from the FDA within days, bolstering our confidence in a potential September approval. If Zerenex is approved in the US, meaningful sales will likely occur in 1Q15 given a 12 week post-approval period that management will likely use to ensure patient access to Zerenex. Despite the delay, with $137.1 MM in cash and cash equivalents, the high likelihood of a US approval, a royalty stream from Japanese partner JT Torii expected to begin in 3Q14, and a patent portfolio which bars competition until at least 2024, we believe shares of Keryx remain undervalued and represent upside to the risk-tolerant, long-term investor.” 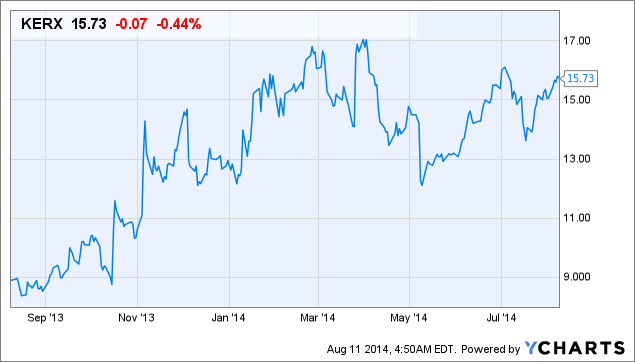