In a research report published today, H.C. Wainwright analyst Reni Benjamin reiterated a Buy rating on Ariad Pharma (NASDAQ:ARIA) but cut his price target to $8 (from $14), following the company’s release of its third-quarter results.

Benjamin wrote, “In 3Q14, EU regulatory authorities issued a favorable ruling for Iclusig, which we believe bodes well for the increasing market penetration in Europe. However, overall actual Iclusig sales have been lower than we had originally projected, prompting a target price revision. Even so, with $273.5 MM in cash and cash equivalents, the potential for steady Iclusig sales, and an increasing appetite among acquirers for marketed products, we believe shares of Ariad are undervalued and present upside to the risk-tolerant, long-term investor.”

The analyst explained his new price target, “By applying an 8x multiple to our revised 2018 revenue estimate of approximately $166 MM (previously was $544 MM), and discounting at 20% annually over 3 periods, we derive a valuation of $2.85. To this, we add a NPV of $5 per share to take into account the company’s pipeline, resulting in a 12-month target price of $8.” 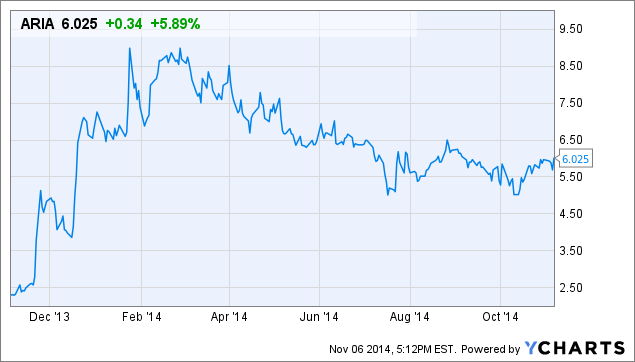