A bearish article published Monday afternoon on Seeking Alpha claimed that LGND stock has the potential to lose 100% of its value based on a severe competitive threat to Promacta and ‘going concern’ risk.

However, Roth Capital analyst Joseph Pantginis noted today that several of the author’s arguments are flawed.

“The crux of the article’s is that Gilead’s (GILD-NC) Sovaldi poses an imminent threat to Promacta, which the author notes is one of just two major sources of revenue for the company. Our position has been that we could expect some decline in U.S. Promacta sales due to increased use of direct antivirals for HepC. However, we expect the slack to be picked up by growing ex-US sales. Recall that ex-U.S. HepC infections are typically caused by non-genotype 1 viruses, which are not targeted by the current antivirals. We believe interferon therapy will remain a mainstay ex-U.S. Recall that Promacta is indicated to increase platelet counts prior to initiation of interferon therapy. We also note that in addition to Promacta and Kyprolis, we expect significant revenue contribution in the near term from Duavee and CE Melphalan. We also believe that Captisol sales will increase materially going forward, as the company has noted significantly increased inbound interest regarding Captisol for both commercial purposes and sample use. The author of the article notes that roughly 2/3 of the drugs in LGND’s pipeline are Captisol enabled and sees this as a risk in the event of a Captisol shortage or interruption. We disagree and believe this is a testament to the strength of the Captisol program. We also disagree with several other arguments made in the article”, wrote Pantginis.

According to TipRanks.com, which measures analysts and bloggers success rate based on how their calls perform, analyst Joseph Pantginis, who covers LGND, currently has a one-year average return of -6.5% and a 38% success rate. He is ranked #3027 out of 3104 analysts. 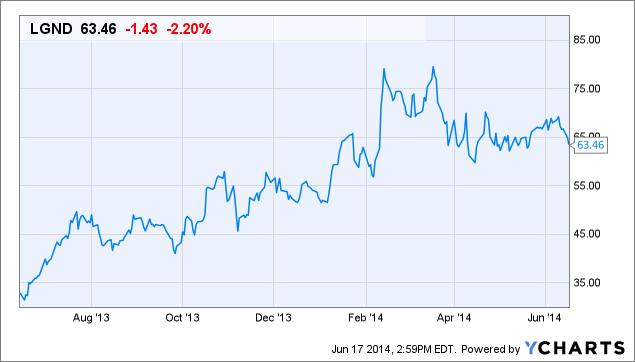