We See A Year Of Growth And Transition Ahead At OncoSec, Says Maxim Group

In a research note released today, Maxim Group analyst Jason Kolbert reaffirmed a Buy rating on OncoSec Medical (OTC:ONCS) with a $3 price target, as ONCS has recently been investing in new hires.

Kolbert wrote, “Investors should stay focused on several catalysts: A complete data set from the P2 (N=30) melanoma trial by year end; Long-term survival data from the P1 trial, including (we expect) some subgroup/case study analysis on what combinations are enhancing survival; and A combination study with anti-PD1/PDL1 to begin, which may represent a fast track basis toward proof of concept and a registrational study in 2016.”

The analyst continued, “OMS-I100 could be critical to extending the efficacy and utility of the checkpoint inhibitors (anti-PD1) in development. This is based on OMS-I100’s ability to induce a local and systemic immune response, and its clean profile (no additive toxicity). We believe it may be able to increase the susceptibility of the target metastasis lesions to checkpoint inhibitors through IL-12 connection. Immune checkpoint blockers, such as Bristol-Myers Squibb’s (BMY – $50.28 – NR) nivolumab, Merck & Co’s (MRK – $58.66 – NR) MK-3475, and Roche’s (RHHBY – $34.35 – NR) RG7446, are pushing to enter the market in 2015, setting the stage for OncoSec to move forward with combination trials. Results from studies of the anti-PD(L)-1 agents have been in the 20%-50% range; in patients with high expression of the PD-L1 biomarker, the anti-PD(L)1 therapies have shown even higher rates (40%-80% range). We believe OMS-I100 could enhance PDL1 expression.”

According to TipRanks.com, which measures analysts’ and bloggers’ success rate based on how their calls perform, analyst Jason Kolbert has a total average return of 3.1% and a 40.5% success rate. Kolbert is ranked #927 out of 3340 analysts. 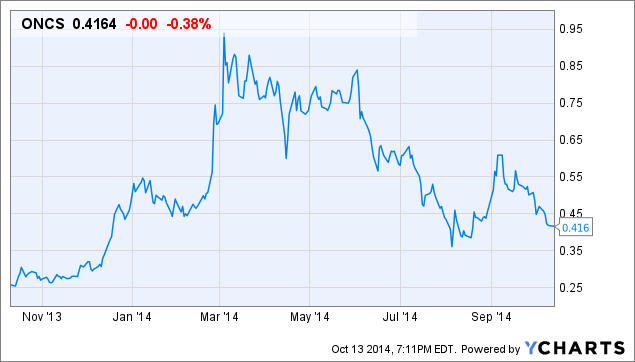