In a research note sent to investors today, J.P. Morgan analyst Cory Kasimov reiterated an Overweight rating on Vertex Pharmaceuticals (NASDAQ:VRTX) with a $130 price target, which implies an upside of 6% from current levels.

Kasimov wrote, “We are reiterating an OW rating on VRTX heading into what we expect to be an eventful 2015. We anticipate continued geographic/label expansion for Kalydeco plus the likely US/EU approval of the VX-809/Kalydeco combo to drive significant top-line growth. We model peak WW sales of the combination therapy of ~$5B. There’s also the potential for significantly more LT growth driven by VX- 661/Kalydeco, which will generate data imminently and is poised to enter an extensive pivotal program in 1H15 evaluating several CF populations, including the difficult to treat heterozygous F508del.”

The analyst concluded, “With a largely de-risked and dominant CF franchise, several pending value-creating catalysts, a cash cushion of ~$1.5B, and an estimated turn to profitability in late 2015 (with significant leverage thereafter), we see the potential for additional meaningful upside in VRTX.” 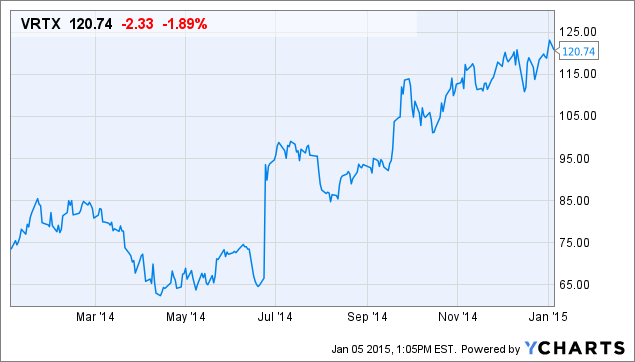