Fein commented: “SGEN reported a strong quarter of Adcetris sales (+16% QoQ; see below), and laid out a map of pipeline advances and catalysts for 2H14. Though most investors’ attention may be focused on topline data from the AETHERA study expected by October, and additional data from the Phase 1 study of SGN-CD19A in NHL likely at ASH in December, we highlight that this fall we should get our first look at the new pyrrolobenzodiazepine (PBD) dimer, a toxin with a different mechanism than auristatin, and uniform antibody loading via site-specific cysteine linkage. While the auristatin technology is by now a reliable battle horse, has done very well for the company and the bulk of its pipeline, we look forward to dissecting PBD’s performance in the Phase 1 study of SGNCD33A in CD33+ AML (data by end-2014). Importantly, in 3Q14 the PBD technology is also being advanced to another Phase 1 through SGN-CD70A, likely aimed at hematologic malignancies and renal cell carcinoma. These studies in tandem are likely to give a good feel for the potential of PBD as an effective tool, and CD33 and CD70 as actionable targets, now that, in our view, the company may be sufficiently experienced to charge ahead without a partner with its next big clinical program after Adcetris”.

Furthermore the analysts said, “In the short term, we believe that the recent macro weakness has created a buying opportunity for investors seeking to go long a prolific oncology pipeline, and ahead of a value-driving catalyst (AETHERA). In the medium and long term, we believe that Adcetris, already approved for the treatment of refractory HL and ALCL, will show further robust activity allowing it to move into earlier lines of therapy (as the lowest hanging fruit) as well as new cancer indications. We also believe there could be significant upside from the prospects of other ADCs and SGEN’s technology platform”. 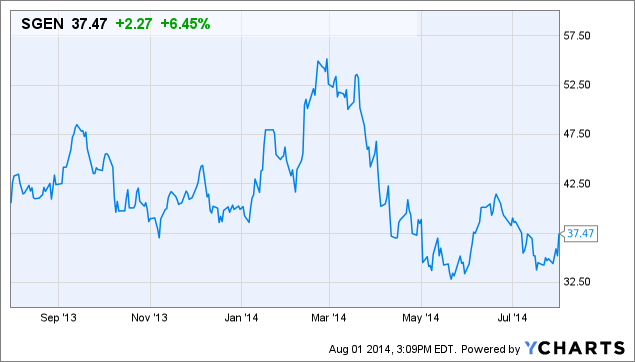