Fein wrote, “Yesterday’s Firdapse study win advances CPRX yet closer to a $300M orphan drug, now pending completion of a rolling NDA submission by mid-2015, with potential approval in 4Q15, and commercial launch in 1Q16. As a reminder, Firdapse currently holds both a breakthrough therapy designation and an orphan drug designation, which in our view should help avoid regulatory turbulence.”

The analyst continued, “In the near term, the company expects to reiterate topline data at the ANA Annual Meeting (Oct 12, Baltimore), and later debut full data at the AANEM Annual Meeting (Oct 29, Savannah). In parallel to kicking off physician education at these meetings (only 750 neuromuscular specialists in the US), in October, the company will also begin an expanded access program of Firdapse (no cost to patients), which we think will not only serve as an important market bridge to commercialization, but may also give early hints of the future adoption and penetration (within the programs’ restriction criteria). Importantly, while the focus of the next 16 months will be taking Firdapse through the FDA and into the LEMS market, the company also noted its intent to expand Firdapse further into congenital myasthenic syndrome and refractory myasthenia gravis, two indications which together could double the current market opportunity held by LEMS. Overall, we believe that the study readout finally signals transition into a stage where perhaps initial investor anxiety about potential dilution will be quickly overcome by growing speculation about possible M&A, though in our view, and as a reality check, an orphan asset with positive data and breakthrough designation currently trading at $210M (as of this morning) remains grossly undervalued on all counts.”

According to TipRanks.com, which measures analysts’ and bloggers’ success rate based on how their calls perform, analyst Andrew Fein has a total average return of 9.8% and a 51.6% success rate. Fein has a -5.0% average return when recommending CPRX, and is ranked #728 out of 3310 analysts. 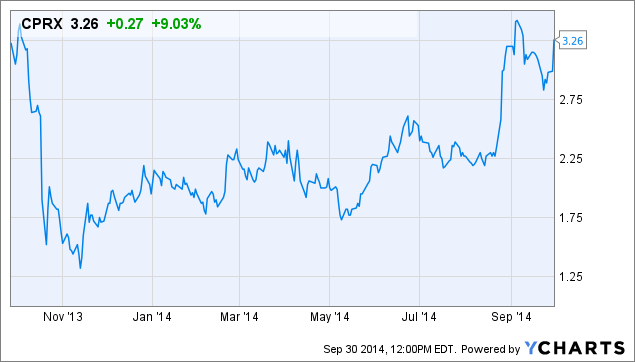