Roth Capital analyst Debjit Chattopadhyay weighed in today with a favorable report on Sarepta Therapeutics Inc (NASDAQ:SRPT), after the company announced the completion of its NDA submission to the FDA for eteplirsenn, the Company’s lead drug candidate, targets the underlying cause of Duchenne muscular dystrophy and is designed to enable the production of a functional internally truncated dystrophin protein in patients with mutations amenable to exon 51 skipping.

The analyst believes that Sarepta would not have proceeded with the filing without tacit encouragement from the FDA, which was likely based on dystrophin re-scoring. Analysis of the fourth biopsy is currently underway and will be submitted to the agency at a later time point and disclosed at an appropriate scientific venue, in his view. Chattopadhyay points out that morpholino-platform’s safety and ability to promote de novo dystrophin (albeit truncated) are key differentiators from a regulatory and commercial viewpoint.

Chattopadhyay reiterated a Buy rating on Sarepta shares with a price target of $45, which represents a potential upside of 56% from where the stock is currently trading. 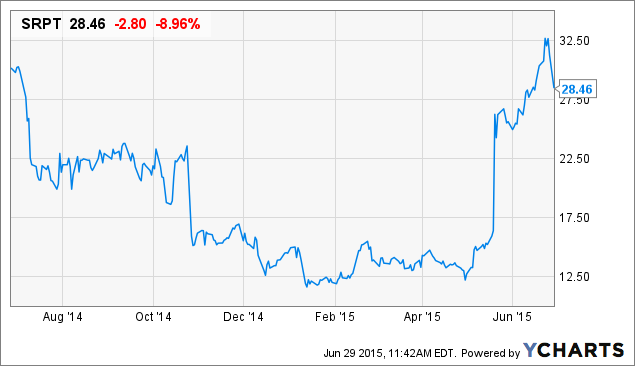