In a research report sent to investors today, Roth Capital analyst Debjit Chattopadhyay maintained a Buy rating on Sarepta Therapeutics Inc. (NASDAQ:SRPT) with a price target of $22.00, which implies an upside of 32% from current levels.

Chattopadhyay commented: “While Biomarin’s (NASDAQ:BMRN) established rare disease franchise is better positioned than Prosensa’s, it does not change our fundamental thesis that SRPT’s PMO chemistry is potentially safer and more versatile than what BMRN inherits from RNA. With significant injection site reactions, renal and hematologic toxicity, first mover advantage, assuming drisapersen’s approval during 2H-15, is likely to be limited, in our view.”

The analyst added, “Based on the injection site reactions, patients may not have been truly blinded, which corroborates with the early efficacy, but a loss in 6MWD after 24 weeks. The larger phase 3 study did not show any clinical benefit, and was potentially impacted by the enrollment of older and sicker patients. Hence, much like SRPT’s NDA filing, which has been pushed back into mid-15, we would not be surprised if the FDA throws a curve ball at BMRN asking for additional data or the initiation of the open label pivotal study prior to NDA submission.” 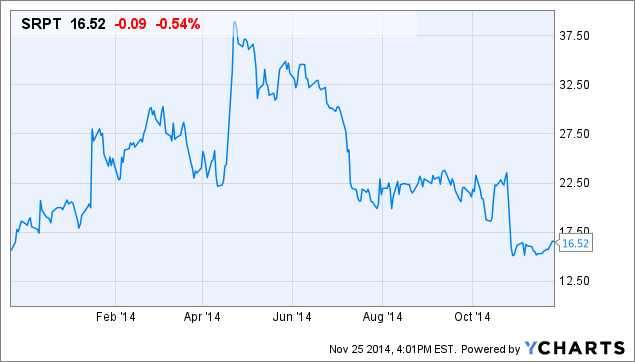