Ahead of the bell, SanDisk Corporation (NASDAQ:SNDK) shares are falling 7.5% after the company posted first-quarter earnings that missed Wall Street expectations. The company’s guidance was also significantly below Wall Street estimates.

In reaction, BTIG analyst Walter Piecyk downgraded shares of  SanDisk from Hold to Sell and reduced the price target to $47 (from $70), which reflects a potential downside of 34% from last closing price.

Piecyk wrote, “We were surprised the stock did not sell off more in after-market trading last night following what was pretty ugly guidance. Our cuts to EPS are a function of both lower revenue and lower margin estimates, which is not a good combination in tech. With an EPS estimate of just $3.15 in 2015, which reflects 45% decline, we think there is still considerable downside in the stock.”

“We forecast SanDisk to return to revenue and EPS growth in 2016, but it’s hard to argue for the visibility in those numbers given the current execution of management and the changing dynamics of the industry. We set a price target at $47 based on 12x our 2016 EPS estimate of $3.89. This implies a dividend yield of 2.6% based on its current $0.30 dividend and 3.0% assuming the company increases the dividend to $0.35 later this year.”, the analyst added. 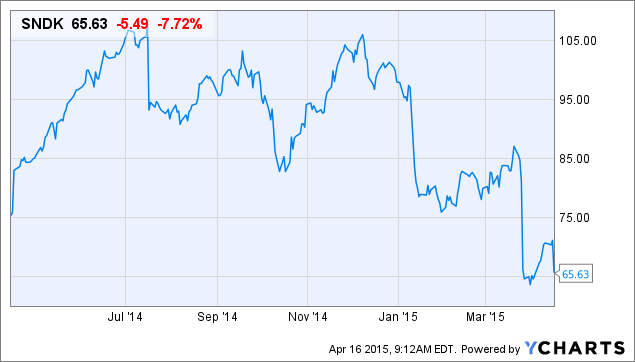