William Blair analyst Bhavan Suri reiterated an Outperform rating on Salesforce (NYSE:CRM), following the company’s fiscal third-quarter (ended October) results, reporting mixed results, with revenue coming in $13 million ahead of the Street, non-GAAP EPS a penny better, and billings roughly $30 million below; however, after adjusting for the negative impact of currency, billings increased roughly 27% versus the Street expectations of 26%. No price target was provided.

Suri noted, “Although we believe the lower-than-expected guidance is explainable by the foreign exchange impact and management’s conservative nature, the 20%-21% growth expectations will likely fuel many of the bears and could create pressure on the stock in the near term.”

The analyst continued, “On the positive side, management commented that it expects further operating margin improvement next year from the 125- to 150-basis-point improvement in the current year. We view this comment as significant, as it shows the company’s commitment to providing continued margin expansion and continues to weaken the bear thesis that the company will never be able to achieve an attractive operating margin.”

Suri concluded, “Although some investors may be disappointed with the company’s initial fiscal 2016 outlook, we believe that it will eventually prove to be conservative. We believe that traction in the enterprise segment, continued improvement in operating margins, and momentum with the Analytics Cloud will all help drive the stock’s performance over the next 12 months. Based on calendar 2015 estimates, the stock trades at 6.1 times enterprise-value-to-revenue, below the fast-growth SaaS group median of 8.1 times. We believe that it should trade more in line with the group, and we remain long-term buyers, based on the company’s growth opportunities, large total available market, excellent management team, and market position.” 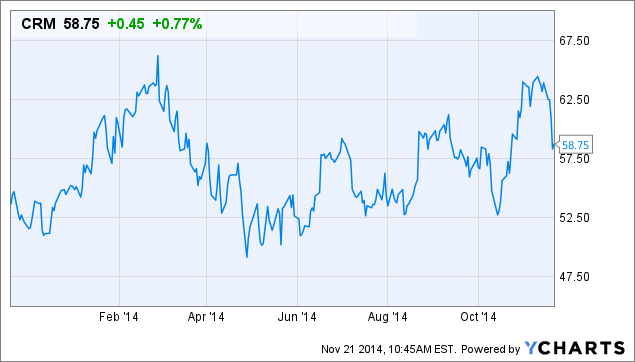