Salesforce.com: We Expect The Shares To Advance At Least 20% Over The Next 12 Months, Says Canaccord

In a research report released yesterday, Canaccord Genuity analyst Richard Davis reiterated a Buy rating on Salesforce.com (NYSE:CRM) with a $65 price target, following the company’s second-quarter results, posting revenues and non-GAAP EPS of $1.32B and $0.13, which were respectively $29M and a penny ahead of Davis estimates.

The analyst added, “As the best-in-class cloud software firm, Salesforce remains our favorite large cap growth stock. With more transparency (revenue run-rates of the various clouds was a good start), the firm could see multiple expansion; however, even if this doesn’t happen, we expect the shares to advance at least 20% over the next 12 months. That’s a worthwhile potential return for a large cap stock.” 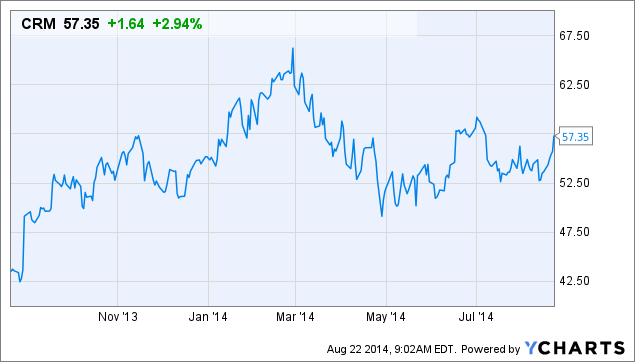