ReneSola Ltd. (ADR) (NYSE:SOL) shares were on the rise Thursday after the company released its fourth-quarter results. The company reported 4Q net income of $75.74 million or $1.28 per share, compared to $20.95 million or $0.39 per share, prior year.

Subsequently, Roth Capital analyst Philip Shen reiterated a Neutral rating on the stock and reduced the price target to $1.45 (from $2.00), as the company issued lower-than-expected 2015 revenue guidance of $1.5-1.6 billion.

Shen noted, “After expanding its OEM capacity to as much as 1.1GW in 2014, we believe management may reduce its exposure to its OEM footprint. The company may now be focused on higher margin opportunities in DG/residential markets globally and is working to provide a comprehensive downstream offering that includes modules, inverters, LED lighting, and financing, among other products. We remain Neutral until SOL until it can demonstrate a more clear path to profitability as it continues to transition its strategy.”

According to TipRanks.com, which measures analysts’ and bloggers’ success rate based on how their calls perform, analyst Philip Shen has a total average return of -5.7% and a 35.2% success rate. Shen has a -35.2% average return when recommending SOL, and is ranked #3377 out of 3505 analysts. 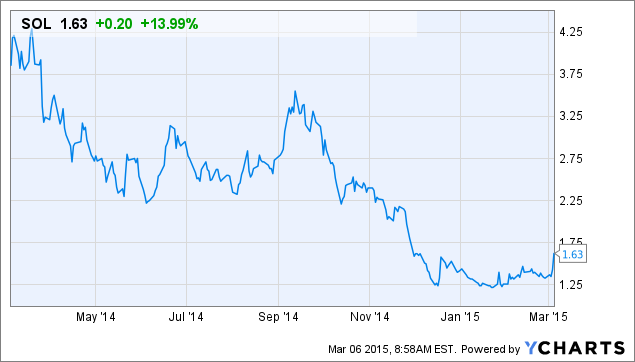