Shares of LeapFrog Enterprises, Inc. (NYSE:LF) are falling after the company’s fourth quarter earnings results fell very short of estimates and management guided to continued weakness in the year ahead. In response, Roth Capital analyst Dave King reduced his price target from $2.50 to $1.50, while reiterating a Hold rating on the stock. Shares of LF are currently trading at $1.58, down $0.49, or -23.67%.

King said, “While shares look cheap, inventories and cash burn are increasing and we have limited visibility into potential takeout prospects. Meanwhile, certain strategic questions linger, especially as the company looks to push further into tablets as monetization of stand-alone content remains elusive.”

Further, “Management guided FY16 revenue down materially and expects EPS to come in below the ($1.08) loss reported in FY15. This in part reflects fewer product introductions as the company looks to diversify its offering into less volatile categories beginning in FY17, though FY16 should still include the launch of 2 new tablets. We would also expect lower margins to reflect increased discounting to move excess inventory.”

According to TipRanks.com, which measures analysts’ and bloggers’ success rate based on how their calls perform, analyst Dave King has a total average return of -4.2% and a 49.5% success rate. King has a -23.0% average return when recommending LF, and is ranked #3392 out of 3623 analysts.

All the 4 analysts polled by TipRanks rate LeapFrog Enterprises stock a Hold. With a return potential of 138.9%, the stock’s consensus target price stands at $3.75. 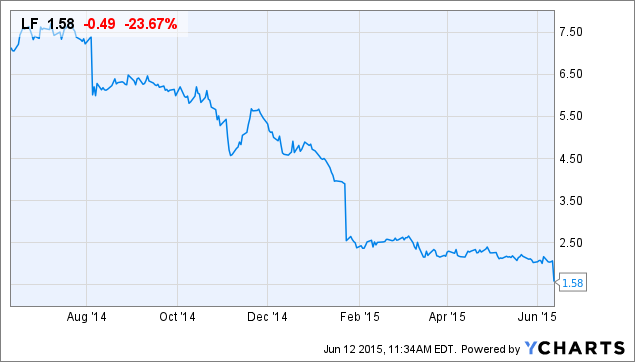