Quiksilver, Inc. (NYSE:ZQK) shares are dropping after 2Q15 results fell slightly short of expectations, and management rescinded full year guidance. Roth Capital analyst Dave King weighed in with his predictions on the stock, maintaining a Buy rating and reducing the price target from $2.50 to $1.50. Shares of ZQK are currently trading at $0.69, down $0.06, or -8.63%.

King observed, “Wholesale declined 4%, while retail was up only 6% on a 3% comp decline and ecommerce fell 6% to 4.8%/sales due to significantly fewer promotions to support core wholesale. We believe this may have been somewhat of an overshoot and expect a modest pickup in future promotions. Notably, fall order books increased in both North America and Asia, while Europe was down entirely due to previously-implemented price reductions.”

“We still expect roughly $35M- $50M in cash generation through working capital (including $9.5M in 1H15) over the course of the year—suggesting $65M-$85M of overall cash flow generation to support expected outlays of ~$135M-$145M (interest, capex, restructuring charges, taxes) before eating into the company’s $118M in liquidity.” Furthermore,”Beyond that, Quiksilver has no notable debt maturities until December 2017, while its lone covenant is triggered only if the company exceeds 90% of its available borrowing.”

According to TipRanks.com, which measures analysts’ and bloggers’ success rate based on how their calls perform, analyst Dave King has a total average return of -4.5% and a 46.7% success rate. King has a -62.5% average return when recommending ZQK, and is ranked #3415 out of 3621 analysts.

Out of the 3 analysts polled by TipRanks, 2 rate Quiksilver stock a Buy, while 1 rates the stock a Hold. With a return potential of 277.6%, the stock’s consensus target price stands at $2.67. 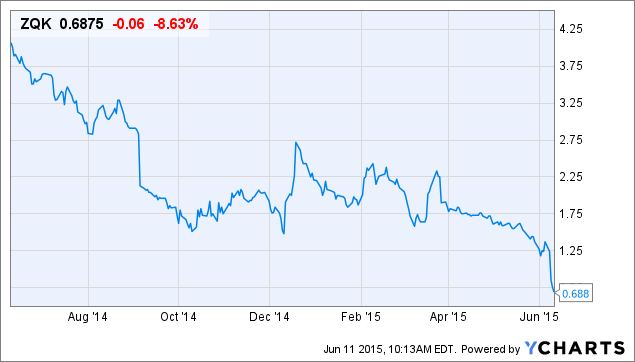