In a research report sent to investors, Roth Capital analyst Chris Lewis reiterated a Buy rating on Nanosphere (NASDAQ:NSPH), but reduced the price target to $0.50 (from $1.00) after the company introduced 2015 revenue guidance of $18-20 million that was below Roth Capital’s prior projection of $21.5 million and the Street’s $22.6 million.

Lewis wrote, “NSPH announced 2015 revenue guidance light of expectations. In the nearterm, we expect investors will remain focused on what results from NSPH’s ongoing evaluation of strategic alternatives. At this point, we see a potential strategic investment as the more likely scenario rather than a takeout. Based on NSPH’s depressed current valuation (1.8x 2015 sales) relative to its above average growth outlook (36% expected growth in 2015), we maintain our Buy rating but lower our target price to $0.50.”

The analyst continued, “As in prior years, management hinted it has taken a conservative guidance approach. However, given the shortfalls in 2013 and 2014 relative to management’s initial outlook in those years, we expect the company will need to rebuild investor confidence and improve sentiment by consistently meeting quarterly expectations and raising its 2015 outlook throughout the year. We have lowered our 2015 revenue projection to $19.4 million, from $21.5 million.” 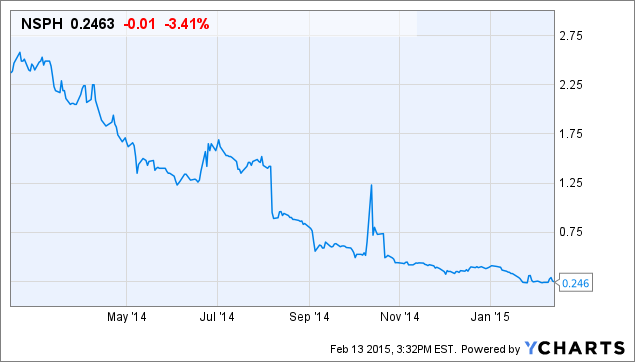 Nanosphere: Despite The Depressed Outlook There Are Still Aspects To Remain Bullish, Says Roth Capital