With Glu Mobile Inc. (NASDAQ:GLUU) preparing to release third-quarter earnings on Thursday, November 3, Roth Capital analyst Darren Aftahi weighs in with his expectations. The analyst rates Glu Mobile a Neutral, with a price target of $2.00, which represents a slight downside potential from current levels.

Aftahi wrote, “Our proprietary analysis tracks game rankings for GLUU games in the U.S. and China, and compares those rankings to the previous quarter’s rankings and revenue. Based on our proprietary analysis, we estimate that GLUU generated ~$50.6M in non-GAAP bookings in 3Q16, suggesting an in-line quarter to our estimate of $50.7M and guidance of $50-52M.”

“Rankings as of today show that top games continue to show weakness in the portfolio, with the exception of a few top games, notably Gordon Ramsay DASH. As of today, iOS iPhone US games ranks, for its top 4 games by revenue, have fallen an additional 47%, 3Q average to today. While we admit this is not an average of October, the directional bias is clearly weaker. We think a weaker guide could be in the cards,” the analyst continued.

As usual, we recommend taking analyst notes with a grain of salt. According to TipRanks, which measures analysts’ and bloggers’ success rate based on how their calls perform, analyst Darren Aftahi has a yearly average loss of 6.4% and a 42% success rate. Aftahi has a 0.1% average loss when recommending GLUU, and is ranked #3851 out of 4188 analysts.

Out of the 9 analysts polled by TipRanks, 6 rate Glu Mobile stock a Hold, while 3 rate the stock a Buy. With a return potential of 59.5%, the stock’s consensus target price stands at $3.18. 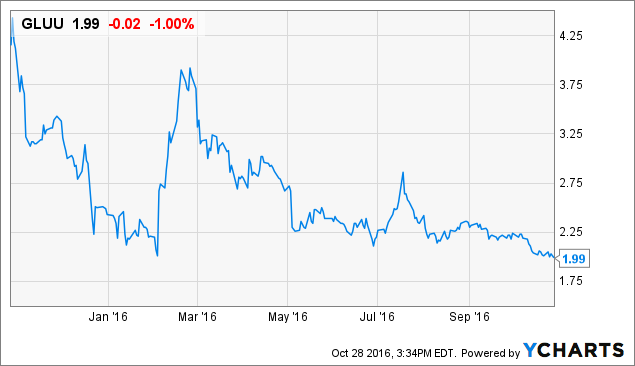