In a research report released Wednesday, Roth Capital analyst Dave King downgraded shares of Quiksilver, Inc. (NYSE:ZQK) from a Neutral to a Sell rating, while slashing the price target from $1.50 to zero. The decreased rating and price target come after the company announced that it is filing for Chapter 11 bankruptcy.

King commented: “We view this news as disappointing, especially given our prior belief that Quiksilver had sufficient liquidity to allow time to evaluate various alternatives—including potential sales of its brands— over the next few quarters. According to press reports, Quiksilver had been trying to attract bidders for a management-led buyout, ideally outside of bankruptcy. However, this approach proved difficult given the company’s high-cost leases.”

According to TipRanks.com, which measures analysts’ and bloggers’ success rate based on how their calls perform, analyst Dave King has a total average return of -11.2% and a 33.3% success rate. King has a -55.7% average return when recommending ZQK, and is ranked #3705 out of 3752 analysts.

Out of the 3 analysts polled by TipRanks, 1 rates Quiksilver stock a Buy, 1 rates the stock a Hold and 1 recommends to Sell. With a return potential of 328%, the stock’s consensus target price stands at $1.95. 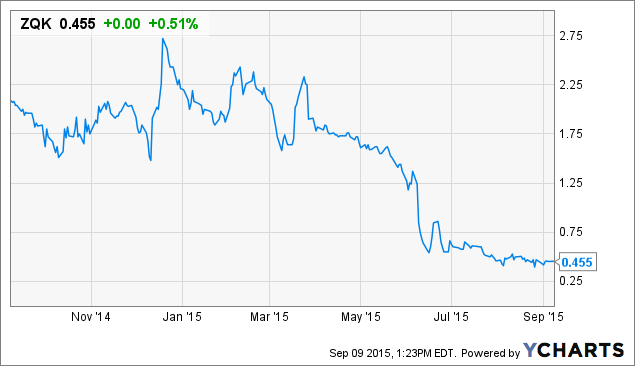