In a research report released yesterday, Roth Capital analyst Anton Brenner maintained a Neutral rating on Keurig Green Mountain (GMCR) with a $120 price target, in light of the company’s second quarter business update. GMCR reported a 5.7% increase in net sales in Q2 to $1,022MM, below Brenner’s $1,055MM (+9.1%) estimate. However, non-GAAP EPS of $0.99 vs. $0.82 exceeded Brenner’s $0.87 estimate.

Brenner wrote, “Keurig 2.0 is now being shipped (to retailers) and will be launched in the Fall. Its primary attribute for consumers is its ability to brew a carafe (four cups), versus only a single cup for Keurig 1.0. This makes Keurig 2.0 suitable for the 25% of at-home multi-user coffee occasions in which Keurig 1.0 is not used. Management believes that this opens a larger percentage of household penetration than previously estimated, allowing sustained strong growth for a longer period of time. Profit margins will be impacted as the 2.0 is marketed aggressively. In addition, green coffee costs are higher and R&D outlays will be high as the Keurig Cold platform continues to be developed. Keurig 1.0 continues to be shipped for the Holiday season, and it will take approximately a year to transition out all of the 1.0 reservoir models. Accordingly, Q4 earnings are projected to decline, although our full-year EPS estimate is unchanged, and.we have reduced our F2015 EPS estimate by $0.10”.

The analyst continued, “Several new partner brands have been added recently, including some previously unlicensed products, and additional new partners are expected to be added. GMCR is marketing to foodservice businesses, with Subway a recent notable customer addition; Keurig is now in 20K Subway locations. We do envision high portion pack attach rates in foodservice accounts because of time constraints and, more importantly, coffee is the highest margin item in the restaurant, but using a portion pack would increase the cost by at least 400%-500%. A more attractive target will be high volume office accounts, which are being targeted”. 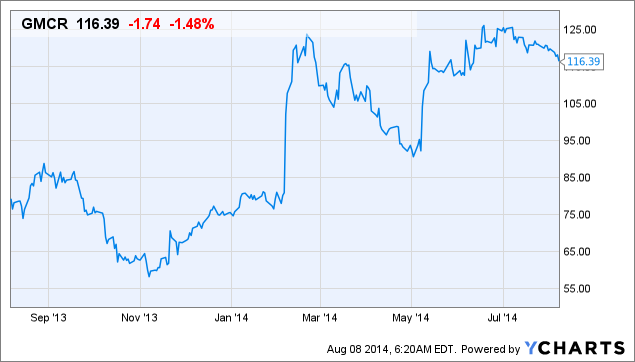