In a research report released yesterday, Roth Capital analyst Michael Higgins resumed coverage on shares of AcelRx Pharmaceuticals Inc (NASDAQ:ACRX) with a Buy rating and a $7.50 price target, which implies an upside of 74% from current levels.

Higgins wrote, “Considering the changes to the device that were made since the CRL and Zalviso’s clinical evidence, we believe Zalviso will be approved following another Phase 3 trial, with shares undervalued at these levels. To us, there appears to be significant investor uncertainty as to why the FDA requested another Phase 3 clinical trial. However, we believe the changes to the device since the CRL have potentially made the device sufficiently different to warrant the FDA’s request for another trial. Upside to our modeling is the potential for the FDA to approve Zalviso this fall due to the company’s ongoing, informal discussions with the agency.”

Furthermore, “While we believe management may be able to change the FDA’s mind this summer, we are modeling a start to the Phase 3 trial in late ‘15, with a resubmission in late ‘16. Given ACRX’s current market cap, we believe the market is placing too much skepticism on the eventual approval in the U.S.”

According to TipRanks.com, which measures analysts’ and bloggers’ success rate based on how their calls perform, analyst Michael Higgins has a total average return of -2.7% and a 40.0% success rate. Higgins is ranked #2875 out of 3694 analysts. 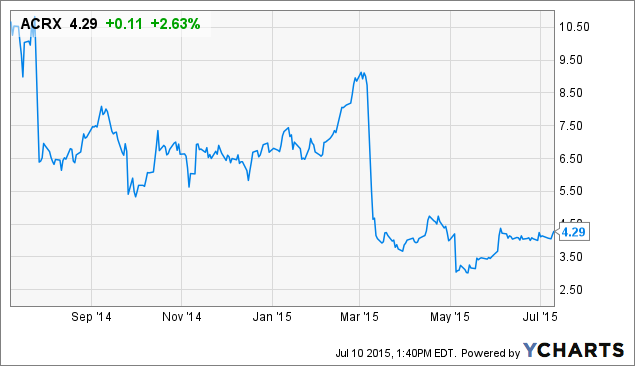